Picked up a pork tenderloin chop yesterday.  I wanted to prepare a grill-only meal, with the exception of the caramelized apple glaze.  Bone in, the chop weighed 1.2 pounds. While I’m no expert on cuts if pork, the pork tenderloin chop appears to be similar to the T-bone cut of beef:  strip (chop) on one side of the bone, tenderloin on the other.  I was able to portion the the chop into three pieces of similar size to the tenderloin.

Start by peeling, slicing and dicing a a gala or Granny Smith apple.  Bring two tablespoons of butter to a simmer over medium heat in a saucepan.  Once the butter is simmering, add the apples to the butter.  Simmer the apples until caramelized.  Add the juice of half a lemon to the saucepan.
Add three ounces of Rosemary simple syrup and reduce the mixture to the consistency of maple syrup.  Dice the leaves of one large sprig of Rosemary.  Toss the dice fresh rosemary in the saucepan with the caramelized apples. 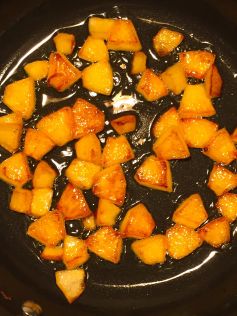 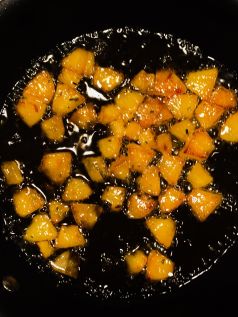 Slice a one or two medium sweet potatos into planks.  Place planks, three tablespoons of olive oil, and two tablespoons of ground cinnamon in a  one gallon ziplock freezer bag.  Shake contents until the planks are evenly coated with olive oil and cinnamon.

Trim one pound of fresh asparagus; add the asparagus, three tablespoons of olive oil, salt and pepper to a one gallon ziplock.

Coat the outer edges of the pork in salt, cracked pepper, and dried crushed rosemary.  The asparagus, sweet potato planks and the pork will all cook in approximately nine minutes on the grill.

Plate the asparagus, sweet potatoes and pork.    Place a liberal amount of the apple glaze over the pork.  The sweetness of the caramelized apples paired with the tartness of the lemon juice make for an interesting mélange of flavors with savoriness of the grilled pork.